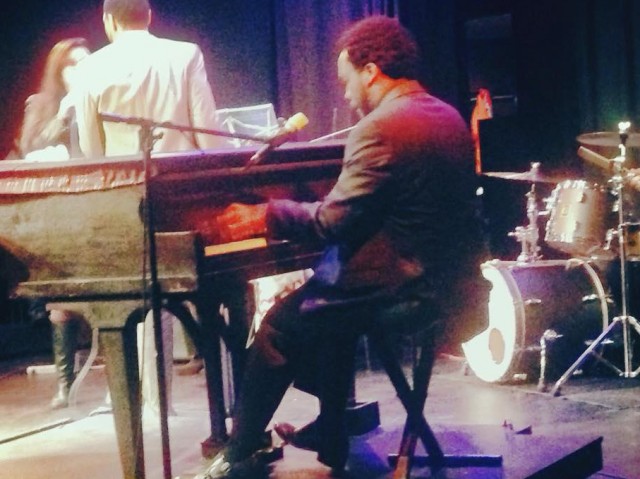 During the 2015 season, the blog will feature interviews with our Filene Young Artists. Today, we hear from baritone Will Liverman, Beaumarchais in The Ghosts of Versailles.

The moment when I realized I wanted to really be an opera singer would be when I was a member of the Lyric Opera of Chicago chorus for a year when I was in my undergrad at Wheaton College. The Lyric brought me onboard to sing chorus in Porgy and Bess and the double bill of Cavalleria rusticana and Pagliacci. By some miracle I was able to work out my class schedule and do my classes in the morning and then hop on a train to downtown and rehearse with Lyric. Wheaton even excused my choir credit that year since I had basically put in the same amount of ensemble hours with Lyric as I would have with the Wheaton Concert Choir.   Anyway, it was the Cavalleria rusticana Easter hymn that did it for me with Dolora Zajick as Santuzza. Never before had I witnessed an art form in such a grander fashion. There I was on the Lyric stage singing my little heart out to the beautiful Easter hymn alongside the amazing Lyric chorus and orchestra with Dolora Zajick soaring above us. The set and costumes were so beautiful and exquisite and everything along with the music was just hitting me at once. A feeling I shall never forget. It was that moment when it all changed for me

My very first role in L’incoronazione di Poppea at The Juilliard School was quite a funny story. I was actually playing about three different roles in that show but the very first time I appeared onstage I was dressed in drag. People say I look like Viola Davis from “How To Get Away With Murder” when I’m dressed as a woman. Anyway, I couldn’t stop laughing and everyone couldn’t stop laughing at me. Well we didn’t laugh blatantly onstage but it was so hard to control! It was the funniest thing. I guess I’m the type of artist that loves to have fun onstage and act silly when it’s appropriate. We have to remember to play and fun in this career!

If I did not sing I would probably go into composition and music teaching. I actually applied for both of those majors when I was looking for undergrad schools. My father was a teacher so that runs in the family a bit and I’ve always loved composing and arranging so I imagine I would’ve been teaching students and composing high school choir music somewhere in Virginia if I wasn’t singing.

I LOVE to dabble in other art forms. Piano like a lot of other singers was where I got my start. For me I grew up in a Pentecostal church and I’ve been playing gospel music since I was around ten. Gospel and R&B are some of my favorite things to play on the keys. I actually love taking arias and changing them to gospel or R&B because sometimes I have nothing but time on my hands.

The Sitzprobe has to be my favorite! Sometimes you forget that a show is going to be played with an orchestra after you’ve been in a room with a piano for weeks and weeks of rehearsal. All of a sudden it’s the Sitzprobe and you’re onstage with a full orchestra and it’s the most exciting thing to hear the music you’ve been familiar with for weeks now being brought to life with the sounds and colors of the orchestra. It’s especially cool when it’s a show you’ve never done!

The hardest thing about this career for me would be staying patient and trusting that things will work out. It’s one thing to talk about being a singer and wanting to have the career and it’s another thing to live it. It may look glamorous but I’m learning that it takes work to get there! You have to be the best you can be for every audition, competition, gig, concert performance, and opera performance if you want to succeed. There are just simply too many singers and not enough jobs out there. You have to work extra hard and be brilliant at all times. You have to have extra thick skin and you really have to push yourself to do it because no one will do it for you. Freelancing ain’t easy!

Not that I know of just yet! Finding a good breakfast spot and a Wendy’s in whatever city I’m in definitely helps.

I would have to say the most exciting thing about opera right now has to be the new opera’s that are being composed out there! Let the new works roll! We need opera composers and librettists out there to give us something new. Yes, it’s imperative that the works from hundreds of years ago stay but the world is changing and if we want this art form to stay relevant we need some new stories and it’s great to see that more and more opera companies have new work initiative programs that give composers an opportunity to bring their new pieces to life. Not all are going to be successful but if we keep cranking out these world premiere’s there are bound to be some hits and there already are a few new pieces out there that are making a splash in the opera world.

The one thing I would like to see changed about the opera world is the fact that some people forget that in opera one should be able to sing. There’s a fine line or balance between looks versus the voice but I’m finding that more and more it’s about the look of a person. This trend also goes along with how the world is changing too. Everything is about image it seems like for some places. There are arguments to be made here on both sides but I can’t enjoy a show no matter how good someone looks if their voice isn’t up to the task.

The most exciting thing that I would tell a first time opera-goer is “Hey! I can get you some comp tickets!”

My dream roles are all tenor roles. Since that probably won’t happen unless I put a raggedy show together myself and cast myself as those roles I would have to say the role of Tonio in Pagliacci and Scarpia in Tosca. Then again I can’t sing those roles either until I’m 63. I guess it’s time for me to start my own opera company!

I love listening to Gerald Finley. I think his artistry is unmatched. The way he communicates in a performance is a master class. If I’m learning a new aria I will always try and find if Finley did it because I’m going to learn something.

I would love to have met Ray Charles before he died and I would have asked him for a piano lesson.

The Ghosts of Versailles!