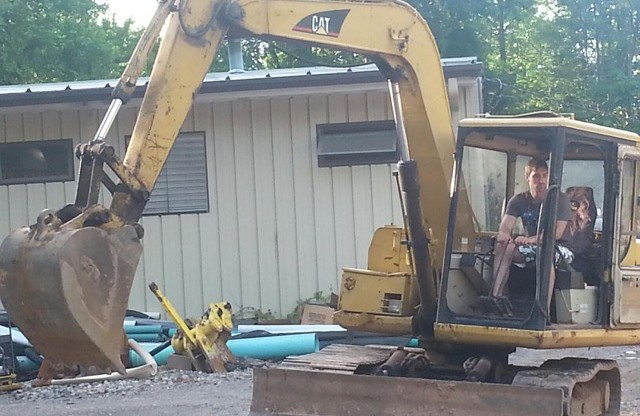 During the 2015 season, the blog will feature interviews with our Filene Young Artists. Today, we hear from bass Christian Zaremba, Bartolo in The Marriage of Figaro and the King of Egypt in Verdi’s Aida in Concert.

While it runs the risk of seeming extravagant or overly romantic there was truly a cathartic moment during a performance of Il trovatore at the MET that I was lucky enough to be performing in as a stage-combat-fighter.  It was during Manrico’s aria “Ah si ben mio” while I was waiting to run and die onstage that the enormity of the moment dawned on me.  The millions of combined hours everyone involved had toiled through in practice and perfection for each moment… the orchestra, the stage-hands, the technical staff, the actors, and the singers; not to mention the collective memory of the audience really inspired in me the belief that opera was the greatest medium of expression.

Before I began singing I was fortunate enough to befriend and spend a great deal of time with a brilliant artist and director from Greece named Dimitris Papaioannou.  He had choreographed the Athens Olympic ceremonies and was in NYC working with the Martha Graham Dance Company. Spending time with him opened my eyes to the effectiveness of perspective in performance and how out of control we are of our bodies. One day we spent hours walking barefoot, back and forth in his East Village apartment trying to isolate each part of the foot upon the floor so that while walking the torso would remain completely still while the legs moved.  It is terribly difficult!!

I enjoy country, Latin, and religious prayer music like Russian Orthodox chants and the Islamic Adhan.  I find it very pure and unfettered.

With Mozart (Bartolo) as well as Verdi (Il Re) I’m gifted with a great deal of information from the composer about their characters.  I won’t speculate on my ideas here because I have to ask coaches and conductors far more learned than me!  Indeed, navigating an aria that is as technically challenging as say, “La vendetta,” while also having fun with the words, colors, and the character is really liberating because it informs Bartolo as a role…he is a bit ridiculous on first look as a character but he is also a real person who has real stakes in the proceedings.  Both roles are going to challenge me in different ways – with humour and human fallibility and conversely with gravitas and what was a deified and supreme rule.  I’m looking forward to it.

The daily work gives me the most pleasure.  I like to think of opera as something akin to a fine craft (like cabinet making or gold-smithing) and each day I’m happy to practice and refine my technique in the role I am preparing.

Maintaining dignity in the face of a myriad of opinions.

I treat myself to an good espresso … that really makes my day.

I think it is fantastic that the opera community is mobilized and actively seeking to expand audiences and become more accessible…some modes fail and some succeed but time will tell if those choices were the right ones.  I think that as in all arenas the so called “politics” of an industry can cause more confusion than not…connected to this in a way is that I wish it to be possible for institutions to charge lower bottom tier ticket prices.  Opera is still considered haute-couture and that marginalizes the vast majority of the population.  I believe that people will understand what quality is but they first must be exposed to it enough to know the difference.

Everyone complains about a disconnected society nowadays.  I dont believe that opera is for the apathetic.  It’s a challenge but also a relief…like wine or scotch – there is a range in terms of quality but the more you learn about it     the more you can draw from each experience and the more appreciation you will have.  Opera is a genre of music but it’s also a testament to how people behave and continue to behave I find that very cool…I’m getting too deep :(

I hope one day to sing Don Giovanni.  I think it’s not only an iconic role but a dramatically complicated one which allows for a lot of interpretation despite not having any watershed arias.  I also think it would be great to play Handel’s Julius Caesar …. because it’s Julius Caesar.

Although I was not alive to hear him, the teacher of my teacher, the basso Nicola Rossi Lemeni continues to inspire me through his many early recordings.  The hommage he pays to the dramatic line and the subtle inflections and colors he employs are very meaningful to me.  Indeed his wisdom and stagecraft that are now being passed to me by anecdote are equally inspiring.  I also look up to the baritone Giorgio Zancanaro in whom I find the most effective of technique and ease of carriage. Truly wonderful.

Fyodor Chaliapin.  He was the bass that had the most impact on how the standard repertoire is interpreted in his fach.  He represented a certain style and dramatic intelligence as a performer and a social consciousness as an artist and man that I very much respect.

Honestly, everything.  I am excited and thankful for the opportunities, the great roles, and the massive amount i will learn from the music staff, the dramatic team, and my colleagues.