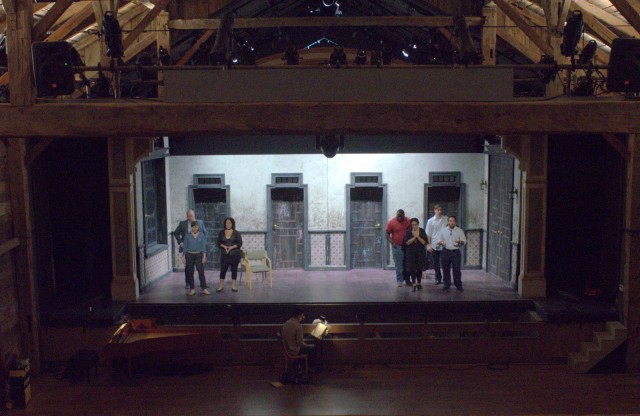 (Blogged while sitting in the back of the theatre, basking in the Sitzprobe.:))

This beast we call “tech week” consists of 5 consecutive days of increasing complexity, culminating in a final dress rehearsal. In quick succession, the cast moves onto the set, don scostumes and hair/makeup, and transitions from piano accompaniment to full orchestra.

In our tech week, the calm in the midst of the technical storm (on day 3 of 5) is the Sitzprobe, during which the singers step away briefly from the trappings and complications of the physical production and focus intently on the music. “Sitzprobe” literally means “sitting rehearsal,” and often it involves chairs and stationary positions. Tonight, we are conducting a modified Sitz called a “Wandelprobe,” in which the cast approximates their movements on stage.

I’ve been doing a wonderful set of interviews with our artists (the series is found here) in which one of the questions is “What’s your favorite part (or parts) of the preparation / rehearsal / performance process(es)?” The most popular answer so far? “The Sitzprobe.”

On this topic our Marriage of Figaro Count and Countess are in complete agreement. Kerriann (Countess Almaviva) says, “It’s absolutely my favorite part of rehearsing. I love hearing the orchestra for the first time. I think it is totally unreal and beautiful. I usually can’t really sleep the night before because I’m so excited!” And Reggie (Count Almaviva) concurs: “I always enjoy the Sitzprobe. It is a magical moment when you go from rehearsing with the piano to actually singing with the orchestra. It really gets you pumped up!”

And pumped up we are.