Greetings from this AWOL Virginian, whose absentee ballot is probably being counted as we speak. Dramatic day for politics. My daughter is studying political science and foreign policy, and I usually look to her to explain these things. She called me three times today to give me updates :o)

Planning on staying up past my bedtime to catch the Met’s Barber cast on Letterman. Pretty exciting. There are naysayers, I know, but I’m not one of them.

Miserable weather in New York today, poor folks arriving at auditions sopping wet. I knew I was about to have a bad hair day by the time I got to 72nd Street, but then again, no one was going to stare at me while I sang…

We went with the more reverberant room this year largely because of the feedback we got from singers. Auditioning is a tough thing, and resisting the urge to push and drive the voice because of a too-dry acoustic is an unnecessary challenge in what is already a tough situation. It means I second-guess myself a lot more about how much the reverberant room is altering the basic sound, but then again, we’re not the ones under the most strain here.

Received this email today from a mezzo who will be auditioning for us in Houston:

I’ve been doing auditions with other companies all month and will have four more auditions right after yours. I saw your blog on “Smanie.” I’m a mezzo and sang that aria for [company name deleted], and the accompanist fell apart on me and stopped playing. It almost makes me feel that I should take it off of my rep list. However, its one of my favorite arias and I have done the role. So, I’m going to take it to Houston when I audition for all of you, but if this piano player falls apart on me like the last couple, I think I’m going to have to pull it as an audition aria.

Well, I’d hate to see you pull it if you feel good about it. I’ve probably heard hundreds of Smanie implacabili auditions, and I’ve never heard a pianist give up on it. Granted, it requires a nimble technique, but it’s a true staple of the repertory, and the overwhelming majority of audition pianists have it well in hand. I believe your recent experience was an aberration. An unfortunate one, yes. But you shouldn’t stop singing it. 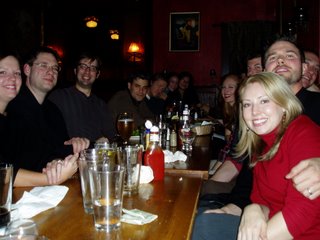 Dinner last night with 15 recent WTOC alums. Always one of the highlights of our fall trip to New York. A little bit of inevitable shop talk, but mostly a chance to catch up on each other’s lives.

And, I have to share this recent email from a colleague whose identity shall be protected. He’s always after me to loosen up and take a few lessons from those American Idol judges. He takes me to task for a recent blog post…

“Objective things: intonation, mastery of languages, the right notes at the right time… then I’m listening for phrasing, musicianship, and general artistry.” What’s with all this high falootin’talk? How about: “Hey dog, you gotta know who YOU ARE, choose the right song, don’t go all pitchy, and above all, keep it real.”