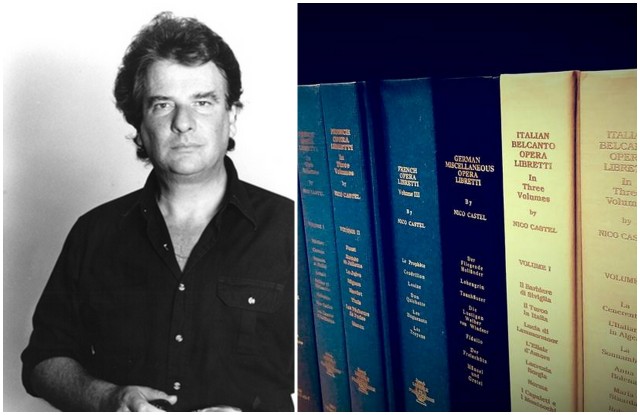 With the passing of Nico Castel last weekend, we in the opera world were reminded how much he meant to so many people, how continuously aghast we always were about his prodigious talent, and what a marvelous legacy he has left.

In 1988, Nico, his daughter Sasha, and a few others of us from Wolf Trap, went to Baltimore to see the Orioles play (in the old Memorial Stadium). It was absolutely hilarious to hear Nico call for a hot dog or peanuts or whatever else using whichever NY accent or foreign accent he wished. The entertainment at the game came far more from our friend in the stands than from the game on the field. I am saddened to hear of this great man’s passing. He gave us all so much. I have students who look at Nico’s books for diction advice and help with translations. Thankfully, they will continue to learn from this absolute master, as will I. His work is not finished…it will live on.

My own memories of Nico include a game we used to play during the summers he was at Wolf Trap. It was a variant of Scrabble we called “Lesbbarc” – sort of a combination of Scrabble and the Dictionary game. You could only play words that were anagrams of real words, and when challenged, you had to be able to define both the scrambled actual source word and provide an etymologically sound and convincing definition for your made-up word. Hilarity always ensued, and so did my respect for this crazily brilliant man who loved words and languages and could wipe the floor with all of us in this game.

Had his opera libretto volumes existed when I was cutting my linguistic teeth, I would have gotten twice as smart twice as fast… They are now indispensable resources for each new generation of singers. My former WT colleague Susan Weinsheimer bought a set for our library when she retired, and they are the most in-demand books we have. And they’re so thoroughly identified with their author that we call them by his first name. (As in, “Do you know where the Aida Nico is?)

If you never met Nico and would like a little taste of his linguistic creativity and wicked sense of humor, scroll down and hit play. We’ll all remember him with fondness and admiration, and for being the single biggest reason that singers now master the IPA more quickly than ever. :)