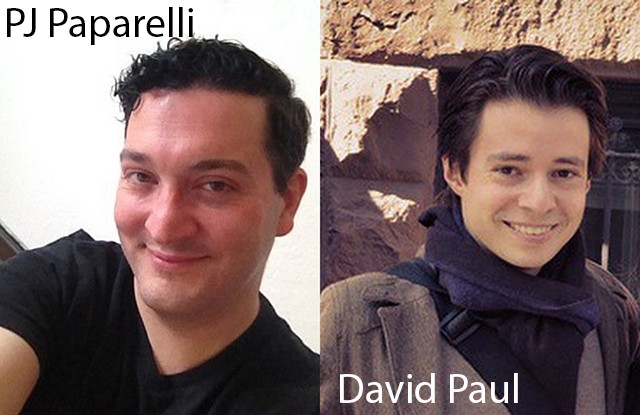 I sat down with Marriage of Figaro director David Paul last week, and we talked about his work with mentor and friend PJ Paparelli, who died in an automobile crash a few days after we began rehearsals in May. David would like to dedicate his work on our production of Figaro to PJ.

David first worked with PJ when he assisted him on a production of Shakespeare’s Richard III at Juilliard. PJ’s approach to teasing out meaning through an examination of text, rhetoric and pace has proved the foundation of David’s approach to working with singers, particularly in the case of recitative.

PJ brought David to Perseverance Theatre in Alaska, where David reveled in his first professional and immersive theatre experience. He then recommended David for an assistant position at DC’s Shakespeare Theatre, which was the beginning of his professional artistic journey as a stage director.

Interpreting and delivering Shakespeare’s texts is similar in many ways to studying and performing Figaro recitatives. The ultimate goal is making it sound natural, but the reality is that the format is most definitely not natural. Paradoxically, the secret of success in making it sound natural is in truly understanding, embracing and honoring the formal structure.

The practical steps in this process include analysis of meter and rhythm, identification of aberrations from the norm, and understanding of the conventions and devices used by the author. The result is a thorough understanding of textual emphasis, weight, importance and proportion. The singer then knows which words to hit hard, and to where each line/phrase points.

David works with conductor Kathy Kelly to focus attention on text, then music, then integrating for a final result. The goal is to find that intersection between the natural and the unnatural. And once you understand the structure and technical composition, you can infuse it with emotion and expression.

Two examples from Figaro – one from Basilio’s role in Act I and one from Figaro in Act III – are described by David in these clips:

If you’d like to hear a little more of the interview, you can listen to a couple of minutes in the clip below. I hadn’t intended to use the audio, so the quality isn’t great. But it is helpful to hear these descriptions in David’s own voice.

We are saddened by the reason for David’s dedication of this production to his mentor, but it’s wonderful to see how someone like PJ can leave a legacy that will live on to improve the artistry of the next generation.