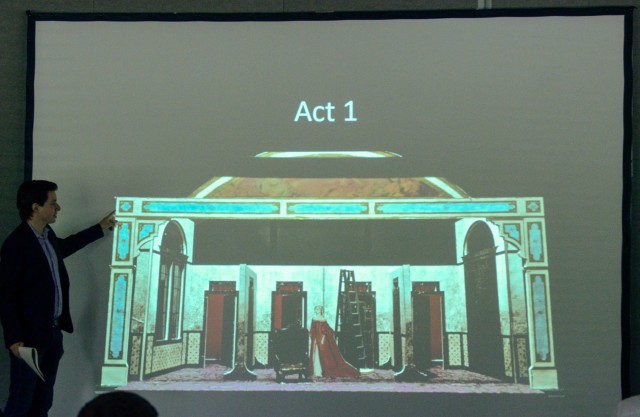 It’s the first day of school, the first day on a new job, and the first day in a new town. Artists arrive and barely get a chance to shake hands before being thrown into a full sing-through of the entire opera. None of this sit-around-a-table-with-coffee-and-read-the-script like our actor friends. Not for us opera peeps, no sir. We show up with music learned, language honed, lines memorized, ready to beat the details into submission.

But before we began, there was a design presentation from director David Paul and costume designer Stephanie Cluggish. A few takeaways:

There will be lots of Spanish touches in this production. Nothing against the French influences from playwright Beaumarchais; but we plan to capitalize on the emotional height of a warm, fragrant Spanish night. (Complete with a working fountain for Act IV:))

We will consciously honor and integrate the elements of farce (it’s all about the doors…) and the lyricism inherent in this story.

Our production’s proscenium arch and the color palette of its costumes will be echoed in our July Ghosts of Versailles, where the characters of Figaro, Rosina and the Count appear, 20 years older.

The good decisions in Figaro are usually made by women. (Can’t argue with that one.)