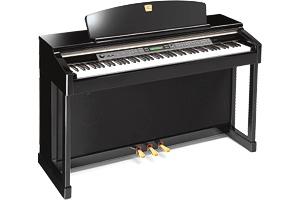 Gotta love those high tech labor-saving devices like the computer (well, it’s supposed to be labor-saving) and the washing machine (not high tech, but definitely high on my list). This week’s favorite is the digital piano.

This morning the piano movers dropped off a Yamaha Clavinova (actually, it’s probably a Klavinova in this case:)) for the rehearsal room. Again, not exactly high-tech (they’ve been around for quite a few years), but most definitely labor-saving. Or at least effort-saving.

The difficulty of rehearsing an opera that’s going to be performed at baroque pitch is that the printed music assumes modern standard tuning of A440. But when you sit down at the piano and play through an aria in C major, the result is a half-step higher than the way it’s going to sound once the orchestra arrives. So in order for the singers to acclimate themselves to the actual performance pitches, the pianist must play everything one half-step lower (B major in this example).

Now we coaches have all learned how to do this. All of us worth our salt can do it. But transposing a 3-hour opera is quite a task. Intriguing in a compulsive, masochistic way, but less attractive in practice. Being free to play the score simply as written frees up some critical brain cells to focus on articulation, voicing, diction feedback for the singers, not to mention planning where we’re going to go for the lunch break.

Klavinova to the rescue. Not entirely satisfactory, for it doesn’t quite feel and sound like a real piano. But the tradeoff is worth it. The press of a button, and A410 is accomplished. Call us lazy. We can take it. It’s totally worth getting up at 7:30 on a Saturday morning and opening the rehearsal hall for the movers.

Sort of stopped following American Idol. I was pretty intrigued this winter, but lost interest in the last month or so. Partially because I just got too busy. But also because that competition, at its earlier levels, was about the raw talent and energy that those folks brought to it. Then it seemed to turn a corner and be all about how the pop music machine (not to mention the TV culture) could manipulate the performers.

Butts in the Seats wrote a few weeks ago about Idol.

I wonder what the impact the perception of easy fame might have on the performing arts and their associated training programs… I would be interested to know if anyone associated with a training program or even a performing arts organization has seen a rise in either numbers of students/auditioners/applicants, etc with completely unrealistic conception of how easily success will come to them. I would extend the same question in regard to attitude/perception. Perhaps there aren’t significantly more people appearing on your door, but do the ones you are interacting with believe their route will be shorter with less dues to pay/shorter time performing for peanuts than they had in the past?

The question isn’t surprising. But the answer (at least from my perspective) sort of is. Maybe I’ll be proved wrong in a few years, or maybe this is an actual phenomenon that hasn’t reached our doorstep yet. But the folks I talk to don’t even think of the Idol experience extrapolating to the classical vocal world. The ability of the TV show to turn the girl/guy-next-door into an overnight success is firmly entrenched in the pop culture world.

I wonder if high expectations and low tolerance for disappointment is going to rob the arts of some real great talent that doesn’t give itself time to develop and come into its own.

There’s more truth here. But I somehow think that’s it’s more personality- and work ethic-driven. But I think the short-attention-span and skewed expectations are more a problem of the audience and the classical music business than they are of the developing performer.

Day off tomorrow. Back on Monday – have a great weekend.