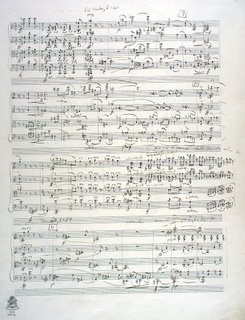 Thinking a lot about revisions. Preparing the talk on Tancredi for Washington Concert Opera, looking at the wildly different ending Rossini wrote for the second production.

In short, the premiere opted for a happy ending, one that focus groups, had they existed in the early 19th century, would’ve surely approved. Certainly it was what audiences expected. (Odd, that something called opera seria could not abide a sad ending.)

For the second set of performances, Rossini went with the original tragic ending from the Voltaire play. Not a lot of evidence exists to prove it, but it seems that audiences wouldn’t stand for having their expectations tinkered with, and the happy ending was reinstated. Until Marilyn Horne got hold of it in the 1970’s, but that’s another story.

Gets Even Tougher in the 18th Century

Our preparation of Orpheus doesn’t involve choosing an ending, but it does offer more options than your typical opera. There are a few gaps and ambiguities in the autograph score, and the door is open for interpretation. Specifically, we’re looking at a transition in Act I whose abruptness could be problematic for today’s audiences.

Do we jump into the breach that’s already opened in this 280-year-old piece and tweak it to accommodate our modern sense of continuity? Do we slavishly stick with the original order, knowing that composers’ first intentions are not always the final word? I for one have not yet decided.

A comment to a recent post asks “A question for you about us big, heavy voices that take years to develop – how do you recommend we find opportunities? …What’s a low bass (or mezzo, or Verdi baritone) to do? How do we deal with the “end of the great big American voice” syndrome?”

I forwarded these questions on to a few of my favorite bassi, and I’ll post their thoughtful responses in a few days.