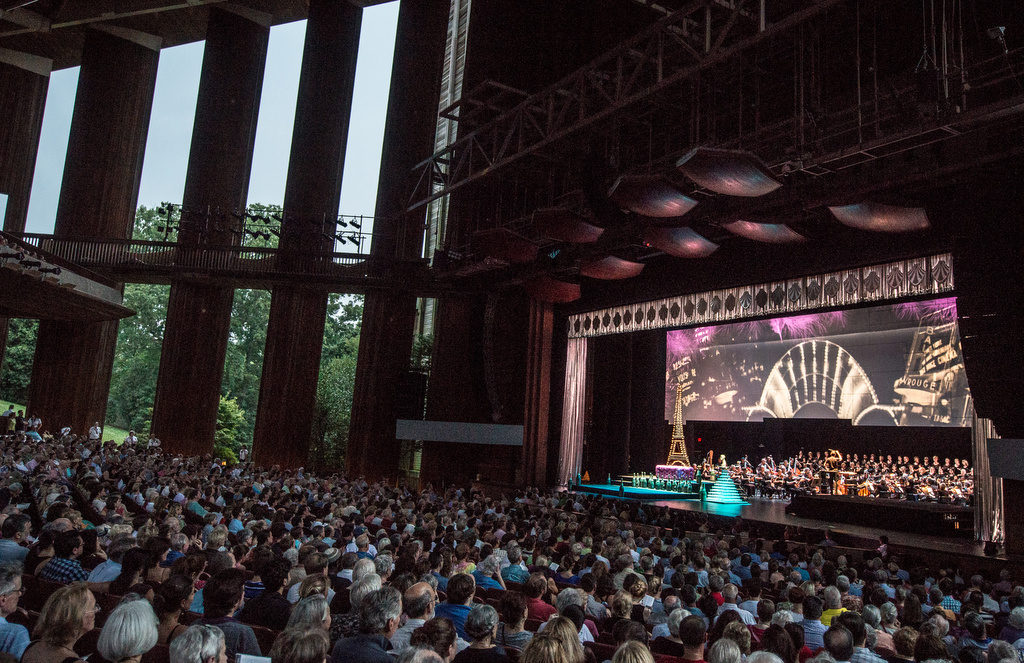 I have been facing inward these last few weeks, preparing the Great Ship Carmen for its sailing. Battening down the hatches, clearing the decks, all those things. But now it’s time to bring all of you into the excitement as we head toward this one-night-only event in Wolf Trap’s beautiful amphitheater, the Filene Center. (photo from last year’s performance of La traviata)

This is the first of three posts addressing the various additional opportunities we’re offering our audience next Friday night. If you’re a press release kind of person, go here for just the facts. If you want my highly unscientific subjective take on all of this, keep on reading.

First, A Word about the Main Thing

We are pulling out all the stops for an exciting performance of one of the most popular operas of all time. The music – lush, dramatic, effervescent – will be performed by the best of a new generation of opera singers, in collaboration with the National Symphony Orchestra. Scenic punch will be provided by custom-designed projections on a 60-foot-wide screen and a new costume design with vivid Mediterranean colors. Drama will be delivered in spades by a cast of which I am already extremely proud. This is the Main Thing. It’s a a substantial thing, steeped in history and enhanced by young talent and energy. It stands on its own, requires no apologies or further gussying up. We never lose sight of it.

So why are we layering on all of these bells and whistles? Why are we offering Google Glass views from the stage and behind the scenes with our tech-celebrity-super David Pogue? (Details in Part 2 of this blog series.) Why are we delivering supertitles (English translations) via wifi to Google Glass and smartphones on the lawn? (See Part 3.) Thank you for allowing me to explain.

The extent to which 21st-century technology touches most of our lives is nothing short of astounding. And as we all know (and are mostly learning the hard way…), this is not always a good thing. I do believe that one of opera’s biggest assets is its lack of dependance on “technology.” Opera is a long-form, immersive, single-minded, almost meditative art, and it can provide an antidote to the skittish fast-forward feeling we get from the digital parts of our days. It’s incumbent on us who know and love this quirky and extreme form of expression not to apologize for it or succumb to the temptation to consider inferior to pop culture.

OK, OK, I know… That last paragraph was written by a woman who wants to put Google Glass in her opera next week? Seriously? Yes.

Will these kinds of experiments convert legions of opera fans? Of course not. We are a people who love the raw beauty and power of the naked human voice. You might come for the bells and whistles (or the Glass or the wireless supertitles), but you’re going to stay for the singing and the story-telling. So what in the world are we doing? We are, bluntly, reimagining our gateway drugs. We are identifying the entry points to our art form and wrestling them to the ground so they have fewer hard edges, brick walls or scary gaping holes.

If you are reading this, you probably love opera. (Or you love someone who does.:)) And every day, one of you is introducing a new fan to opera. It has always been thus and will hopefully always be. But potential opera lovers are not touched by our culture at large in the same way they used to be. Back in the day, media outlets gave serious ink, air time and credibility to critics and cultural emissaries who were able to shape the national discussion. Now, everyone is his own curator. Crowd-sourcing can be a great thing, but if the option of Carmen never makes it in front of your eyes, well, it simply doesn’t exist. For that, we are dependent on 21st-century media (professional and social). And getting the attention of that media requires increasingly new ideas, creative tweaks, unusual hooks.

This might sound crass to you, but it’s a perfectly normal part of life for those of us who love niche art forms and struggle to get them noticed. This is not new. And the simple act of aligning “technology” with one of Western music’s oldest art forms can seem incongruous. The incongruity isn’t the point, but it can sometimes grab the attention of people who aren’t already looking in our direction.

21st-century audiences are used to context, texture, and many layers of engagement. People who want to try on opera for size need to be able to do so in an environment that has some familiarity; increasingly, that means an environment that is wired and connected. Will some of these dabblers mature into opera lovers who can disappear for hours upon end into music that transports them to another place and time? Perhaps a few of them will. But I don’t know that it’s fair to expect them to start there.

It’s not easy for us to engage in this fast-moving cultural transition, but we have to do it. Technology is not the point. (Remember where we started, paragraphs ago? No? Then scroll up and review The Main Thing.) Technology is just a tool. But unless we exercise this muscle, we won’t figure out how to use this tool or be able to make an informed decision about whether we should.

Next: The Glass-Eye View of Carmen. Stay tuned.