Ah, the “off-season.” As in, “It must be nice to work for a summer opera company. What do you do the rest of the year?”

Truthfully, it still boggles my mind. We are literally scrambling, working through the evenings to meet deadlines. How can there not be enough hours in the day in February?
Planning at The Barns 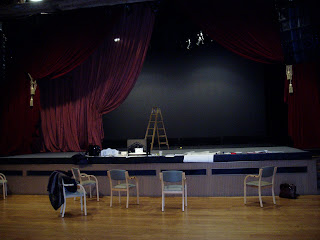 A few people have called my attention to the fact that I promised that repertoire details would be available in February. Alas, that would be late February. Strictly speaking, February 28… Our season details go public on March 1, and tickets go on sale on March 9. So I figure I can’t get in too much trouble if I spill the beans on the 28th.
But for now, I’m speaking in generalities.
The director and scenic designer for Opera #1 were at the theatre today. We were planning a re-mount of a previous design, but after today’s exciting discussions, it looks as if it’s going to be a completely new production.
Opera #2 has had its challenges with printed materials. We seem to be the only company in this country that’s ever done it in original language (French), and finding the complete libretto hasn’t been easy. And there was a protracted disgreement between the French publisher and its U.S. distributor about who was allowed to grant the rights to what. I think we’ve just about got it sorted out.
Planning proceeds apace for Opera #3 (at the Filene Concert), a fabulous concert involving two of the WTOC’s “alumni”, two recitals with Steven Blier, and a week of improv at the Theatre-in-the-Woods. Details in 3 weeks.
A Moving Target 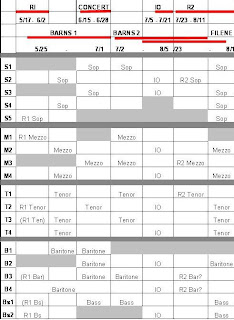 It’s an aberrent year. We’ve had three changes in our roster in the last six weeks – all after the crazy house of cards that is our roster had been built. 19 singers sharing 56 role assignments over 13 weeks. The infamous grid at left. (Without project and role names, of course. Still muzzled.)
The good news is that the changes have all been the result of important career opportunities for those who withdrew. And, after all, we exist to give our young artists a leg up – a chance to get the experience they need to take the next step in their careers. And these three (all of whom would’ve returned to Wolf Trap for their second summer) just happened to get some important offers that weren’t so very convenient for us….
Not that we haven’t ever had to make replacements late in the game before. But it’s only happened five times in the last ten years. (Twice due to professional opportunities, twice because of illness, and once due to a true tragedy.)
Audition Feedback
I have a board meeting on Thursday, for which it will take much of the day tomorrow to prepare. But Friday is all about getting those feedback responses out. We’ve had about 65 inquiries to date, and it takes a good 10 minutes for each one. I’ve done almost half and will finish the rest by next week if it kills me. (I know… I’ve said that before….)
Recommendations
A comment from last week’s post asked for guidance on those pernicious recommendation letters:
So what exactly makes a good reference, is it the things said, the person who gives the recommendation? How can we as applicants ask for a better recommendation and what can writers do to write a better recommendation?
There’s little that the singer/applicant can do to control the quality of a recommendation. Basically, if we as professionals agree to write one, we are agreeing to represent you in a positive light. Some people in the music business have a good business sense and a good way with words, and others don’t. We’re not going to admit or not admit someone into our audition process based on the writing skills and general effusiveness of their coach/teacher/mentor.
So,
1) You can ensure that the recommender (is that a word?) knows exactly to whom s/he is writing and what the nature of the program/competition/etc is. The most important thing we want to know is whether or not you are a good fit for this particular opportunity at this particular time in your development. That’s why the over-the-top recommendation (“She has the best voice I’ve ever heard in my career….”) is rarely truly helpful. It only lets us know that the writer is dedicated to you and believes wholeheartedly in your potential. And that may say as much about the writer as the object of his/her recommendation.
In particular, for our Studio Artist program, we need to know if applicants are vocally solid enough to spend a summer away from their teachers. We hope to find out that there is a strong work ethic and a sense of curiosity about the business and enthusiasm and ambition to develop a career.
2) Most importantly (and this sounds really stupid, but it’s at play, so why not say it?), we want to see if someone respected in the field is willing to go out on a limb for you and simply make the gesture. We also decided to put all of us through this (yes, all of this – you have to solicit, your mentor has to write, and we have to read) because when we get to the point of choosing those final 12 singers from the group of perhaps 20-25 who seem equally capable, there may be some details in these letters that help us round out the impressions we gleaned during those precious 10 minutes of auditioning.
What I Did Last Week – The inauguration of a regular blog feature to follow me through this pre-season period.
I do this ostensibly so that those of you who are interested in arts administration will have an idea of how you might spend your time in a job like mine. But also because I find it inconceivable that I can work hard and fast and still be behind, and I feel better knowing that I’ve done something.
Wrote all permutations of “blurbs” for the upcoming season. Each performance (opera, concert, recital, etc) needs different types and lengths of “ad” copy and images for different purposes – brochures, calendars, web pages, print ads, radio spots.
Drafted a chorus rehearsal schedule. Chorus auditions for our Filene Center opera and our concert opera performance are taking place in 2 weeks. (Want info? Write wtocauditions@wolftrap.org) By the time of the auditions, a draft summer rehearsal schedule needs to be in place.
2007-2008 – Finished all schedule discussion and negotiations with chamber music artists and their managers for the 07-08 Discovery Season.
Wrote recommendations. Yes, I’m often on the other side of this equation. Submitted recommendations for some of our previous Filene Young Artists for upcoming competitions.
Finalized music and stage management staff configuration.
Re-cast assignments for those artists who vacated our roster.
Isn’t it sad that some of us feel a need to validate our existence?
Playing the Piano in Pennsylvania 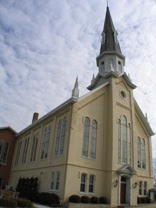 I’m taking my modest solo piano recital to Pennsylvania this weekend, performing in the community in which I grew up in order to dedicate a refurbished piano in my home church. The memorial funds contributed in honor of my mom allowed this instrument to be installed in the sanctuary.
I’ve gotten a little cavalier about practicing over the last week, since I seem to have survived the concert in Arlington without too many visible scars. I think I should not be so complacent.