Some Halloween goodness from the WTOC on the road in Philadelphia. 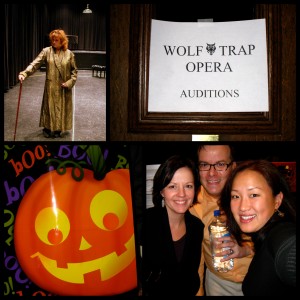 I found my costume robe and cane inside the light booth in the black box theatre. (Shh. Don’t tell. I put it right back.)

Rahree, IvoryTickler and I were going to wear witch hats, but we thought that it might send the wrong message. So we had to settle for putting a big bag of chocolate in the hallway.

A mezzo-soprano brought us the witch Ježibaba’s aria as a special spooky treat, and we had a mid-morning visit from Mephistofeles himself.

MB wore his orange shirt and sent us away at the end of the day by playing the postlude to Aleko’s cavatina in a stunning fashion that is still with me hours later. 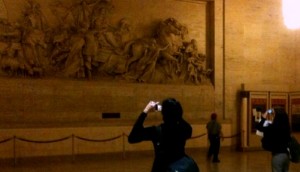 30th Street station wasn’t as Halloweeny-festive as we had hoped, but it mattered not. Our Redcap Tony was one of the nicest guys you’d ever want to meet, and he was so pleased to show off his station, telling us all kinds of stories while we waited, including some history about the History of Transportation sculpture at left. There’s nothing better than meeting peoplewho love their jobs.

I love my job, too, but after seven days straight, I’m as giddy as a small child about sleeping late tomorrow and listening to absolutely nothing all day.  See you Tuesday!