For the Wolf Trap Opera Studio Artists, however, the end of summer is not nearly so leisurely. 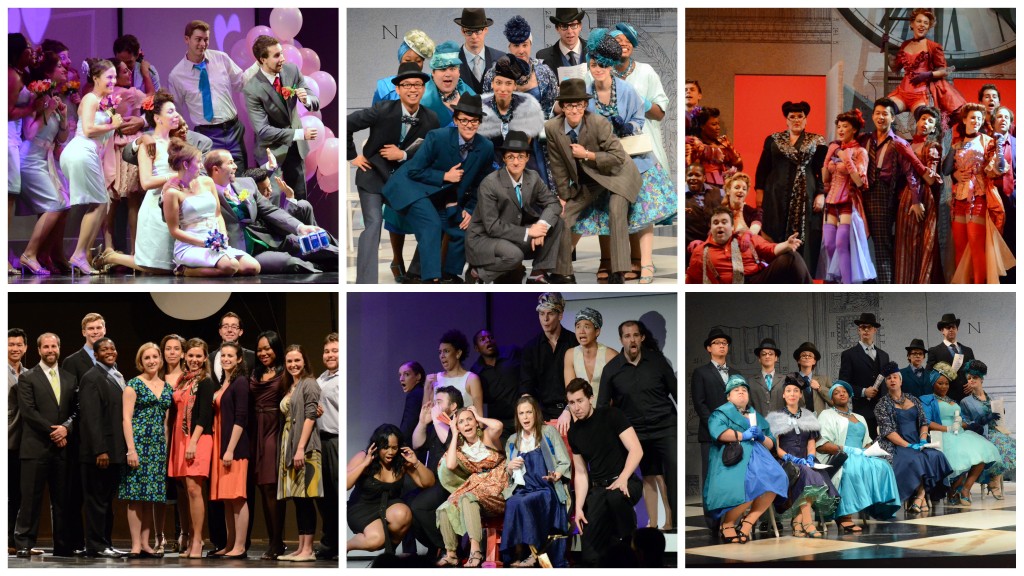 They’re singing in the chorus of Stravinsky’s The Rake’s Progress, which has a fairly thorny musical language. Add to that what seems like a million characters, with costume changes ranging from whores and roaring boys to cross-dressing (boys and girls alike) to white-robed sanitarium patients? Well, you’ve got yourself an involved theatrical experience. And two performances in one weekend? Well, that’s maybe a little mean on our part, but they’ve navigated the schedule quite well.

But that’s not all! A quartet of Studio Artists will dig even more deeply into Stravinsky’s varied musical vocabulary for a performance this Friday, August 10. Hosted by coach/accompanist Jeremy Frank, this evening’s program is titled A Composer’s Progress.

Sing Me a Rainbow

Tired yet? Me too, but there’s still more to be done! Two quartets are taking their talents into Washington D.C., in a collaboration with Children’s National Medical Center called Sing Me a Rainbow. They’ve taken images from the Art Therapy department, and programmed songs that related to the images. Operatic repertoire, art song, musicals, pop tunes… the repertoire represented on their programs is varied and highly entertaining. They’ve worked in some a cappella numbers, as well, that they’ll be able to take to different floors in the hospital to meet and sing for patients. I’m so very proud of the relationships that these singers have crafted; they’re all going on both Tuesday and Wednesday, and have crafted an 8-singer a cappella version of Katy Perry’s “Firework” as the closing piece. This project is a special one for me, and I’m so very pleased and proud of the work these singers have put into the project, and of the joy and generosity that surrounds it.

Oh, did I mention that they’ve had 3 auditions AND a round of aria coachings in the past 6 days? Because they’ve had to polish their A game to a serious level in a short time. I think that they’ll benefit from working out that audition muscle prior to the start of the season…I hope they think so, too.

The Studio will end the season with the last performance of Rake on Saturday, August 11. On Sunday, they’ll scatter to the winds: to family, to school, to new apartments and jobs. I hope that, (once they have a chance to breathe!) they’ll have a few minutes to reflect on their summer, on how far they’ve come in a few short months, on the contacts they’ve made and the relationships they’ve built. And I hope they know that they’ve helped us laugh, cry, grow along with them. We are so very proud and happy to know them.