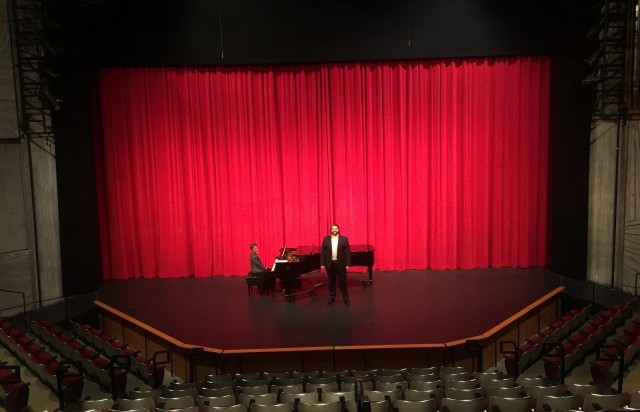 Auditions in the Patricia Corbett Theater at CCM

We’ve talked a bit about what happens outside the audition room. Now let’s turn our attention toward what happens between the door and the first note…

Don’t spend a lot of time obsessing about how to relate to the audition panel. Auditions aren’t cocktail parties, and other than avoiding the appearance of being extraordinarily grumpy and cranky, there’s not a lot to worry about.

There’s no reason to walk to the opposite end of the room to shake hands. I know panel members who are firmly against this and others who are mildly irritated by it. Almost no one thinks it’s a great idea, and it’s almost never not awkward. And you get a limited amount of time allotted, so you want to use it to sing, not to work the room.

If the panel is paying attention when you enter, it’s perfectly appropriate to greet us with “Good afternoon” etc. We try to say hello to everyone before they have a chance to wonder what to say/do, but sometimes we get caught up in paperwork. The niceties aren’t compulsory, though, and some panels aren’t interested in anything but getting right down to business. Don’t take it personally.

Most of the time, the panel has your materials. If you need to submit a rep list change (where allowed), often the monitor will handle it. If not, deliver it to the panel with a smile, then get right to the main event.

It is often helpful for the panel to hear your name. If our system is working well, we’ll know who you are; but sometimes things get out of sequence and we get confused. “Good afternoon. My name is Kim Witman…” should do it.

Be efficient and pleasant. Then sing.

We’ve closed out a really strong two days of auditions in Cincinnati; headed back home tomorrow for a day of laundry and repacking, then to New York for next week!