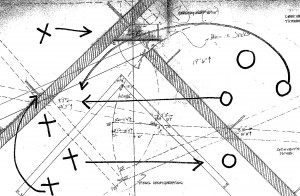 When we talk about our little corner of the opera business, we like to point out that we’re different from many other companies.

Sure, there are other young artist companies with great singers. There are folks who mount productions to feature their young artists. There are programs who have a mix of recital and concert work in addition to opera. And I definitely have colleagues who have as vicious a travel schedule as we do during the autumn audition tour.

In talking with donors and non-opera types, we often draw comparisons to medical residencies (or, for the non-medical types, think Grey’s Anatomy or St. Elsewhere); where young professionals are finally able to apply the knowledge they’ve learned in the classroom, while having seasoned doctors available to consult and oversee tricky procedures. (We of course cannot comment on any behind-the-scenes hanky-panky. And if you know any, please keep it to yourselves…ignorance in this instance is bliss.)

So, what really sets us apart from the other US summer programs? The biggest single aspect is that we wait until we’ve heard everyone before we choose the operas that will best feature our singers.

As I sit here watching the NFL Wild Card games (Go STEELERS!), I’m struck by the similarities between what we do and Fantasy Football. On NFL.com the Fantasy Playoff Challenge highlights the following dictum:

Pick the NFL players who you think will perform best in their actual NFL playoff games.

And that’s exactly what we do, but on a vocal and musical level. Rather than choosing the players that will make it into the playoffs at the outset of the season (boy, that sounds silly, doesn’t it?), we go out and find the most talented singers, who will perform to the very top of their abilities…only after we’ve assembled a kickin’ team of performers do we decide what playoff game – or, in our case, opera – they’ll be performing in.

Now, we can’t choose all sopranos even if there are a million fantastic options (and every year there are), because every opera requires a variety of voice types…in much the same way that a football team comprised solely of running backs would suffer from a marked lack of defense, or a team of all defensive tackles would have a hard time getting onto the scoreboard. Each year we field a few singers in each voice type, but when a rarer voice – say, a countertenor or a dramatic tenor – comes to our attention, we tend to let that voice ‘quarterback’ by dictating some of the repertoire decisions.

The singers you’ll hear this summer have been cherry-picked from the best programs that this country has to offer. It’s an operatic version of a Fantasy Football game like nothing else you’ll experience. And while I’m a little sad at the way the Wild Card game turned out (sigh…stinkin’ new overtime rules!), I promise that our ‘games’ will be as exciting as the Steelers-Broncos game.