Most people who were in the Washington, D.C. area in the spring of 1982 remember it. In the early morning of April 4, 1982, Wolf Trap’s Filene Center burned to the ground. (It was actually the second time that fire had threatened Wolf Trap, as the original  structure had suffered a fire during its construction.) It’s almost inconceivable that the season went on. In short order, a temporary theatre was constructed in the meadow, and the next two summers’ performances were held  in the Meadow Center.

Had The Barns not been available to the Wolf Trap Opera Company, it may not have survived 1982. It’s no surprise that belts were tightened in the wake of this difficult year, and the whole Foundation made sacrifices. The extent of the WTOC audition tour was trimmed and production budgets were significantly cut. If the Company had been primarily dependent on the Meadow Center as a venue, things might have turned out differently. Thankfully, it was able to retrench a bit but still do strong work in its new small theatre, which was to become its true home over the next 30 years. 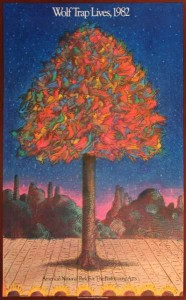