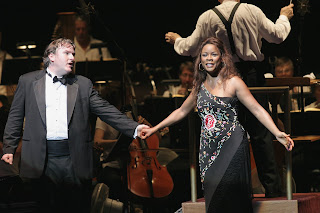 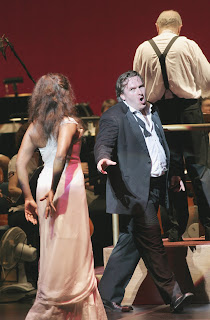 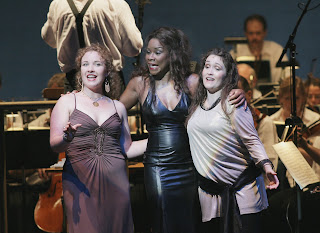 Carmen in concert on Thursday night. (Photos by Carol Pratt)

More exhausting than it had any right to be, but more rewarding, too.

Diva and divo (WTOC alums Denyce Graves as Carmen and Simon O’Neill as Jose) were on site for about 3 days, both a bit jet-lagged but happy to be here. I’ve known Denyce since she was a young artist and I was a staff coach, so it was lovely to catch up again. Simon was here more recently, but his career is really taking off. Bringing both of them on gave us a chance to do something like Carmen – a piece that has great roles for our regular company members, but requires more vocal maturity and heft in its two lead roles.

I was a bit unsure as to how the mixture of young artists and experienced guests would work (it’s been over 20 years since we did anything like it), but aside from the first few awkward minutes, it was perfectly fine. Everyone had a job to do and did it well.

Actually, that is the key to these crazy projects. Just a few days from page to stage, and there’s no time to coddle or coax. So the success lies in surrounding yourself with people who know their jobs cold and can turn on a dime. Conductor, singers, stage managers, coaches, director (yes, even a concert staging needs a good director), chorus (grownups and children)… the list could go on.

The whole really is bigger than the sum of its parts. Thus it is with a traditional production, but in that case, everyone involved can watch the coming together in a gradual, predictable fashion. With these quickies, the big picture only appears at the single performance, suddenly and belatedly. Fully formed and sprung from the head of Zeus.

And for some reason the administrative burden (oops… rather… administrative contribution) is greater than in a typical production period. So it feels pretty overwhelming to a small staff like ours. It didn’t help that the heat on our only day of rehearsal in the theatre was crushing. And I’m not doing so well with heat this year…

Denyce did a Q&A session with guests and young artists as part of Wolf Trap’s master class series. We captured some audio, and I need to check it to see if it’s usable and editable as a podcast. If the quality is decent and Denyce gives permission, I’ll try to get it posted.