Thanks to our Best Opera Recording nomination for Volpone, we were in the slightly surreal and truly wonderful position of being able to attend last Sunday’s GRAMMY festivities in LA, and I’d be remiss if I didn’t file some sort of report.  So… 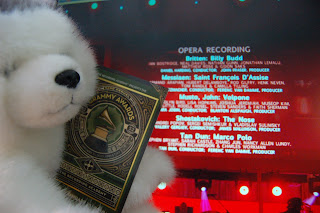 Yes, the classical music industry is marginalized, along with over 90% of the rest of the GRAMMY categories.  We joined our colleagues in jazz, R&B, country, world music and many other genres at the pre-telecast ceremony on Sunday afternoon.  Some of the bigger pop music names who were prepping for the evening telecast were unavoidably absent in the afternoon, but some of them (Taylor Swift, most notably) managed to make an appearance. 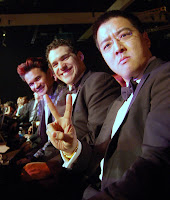 And yes, it was Woody Allen who said that “80% of success is just showing up.”  In such a scenario, we probably would’ve taken home the statue, for almost none of the other classical music nominees were there.  The winners sure weren’t.  It’s no secret that our part of the industry has a complicated relationship with the GRAMMYs, though.  We decided to attend because it really was an honor for us to be nominated, and we wanted to acknowledge that.  (And we figured there was a once-in-a-lifetime kind of experience to be had in the process :))  But after seeing how alone we were, we figured that the whole thing should work on a “must-be-present-to-win” premise, kind of like a door prize.  That way, if those folks from London and the Mariinsky and the Hague and the Netherlands couldn’t show up, we’d get lucky!

And I Thought We Were a Niche Market…

It’s amazing (even for someone like me who works for a presenting organization that covers many many genres) how many different kinds of music there are out there.  Electronica, gospel, alternative, R&B, rap, country, new age, jazz, Latin, Americana, traditional folk, Hawaiian, Native American, children’s music, reggae, zydeco and more.  And the long tail is growing every day, even as the public face of the GRAMMYs (via the telecast) gets more and more mainstream.

Speaking of the telecast, I thought that Pink’s performance felt a lot like the early days of opera must have.  The atmosphere at the Staples Center that night bore a lot of similarities to what we know of 18th-century opera.  Lots of people socializing during the boring parts, only paying attention when the famous acts are on stage, watching highly sexualized performances by big name stars, some of which fly in from the sky and make the audience gasp.  Sadly, the GRAMMY folks don’t agree, because the two tips of the hat given to opera that night were in the form of a stereotype-reinforcing setup to the rap number and a weird presenting assignment to Placido. 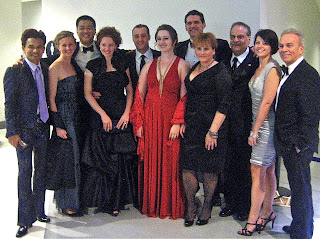 Attending as representatives of the record label (Wolf Trap Recordings), we were lowest of the low on the totem pole.  We sat in the nosebleed section of the arena, which had its pros and cons.

On the plus side, we had a bird’s-eye view of scene shifts and changeovers (during the commercial breaks), and it was comforting in a Schadenfreude sort of way to see that the big boys screw things up occasionally, too.

While It Was Snowing Back Home… 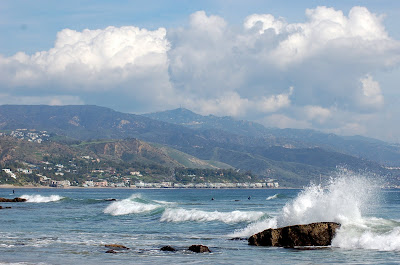 …we enjoyed the always-generous hospitality of friends in Malibu, with long walks on the beach in sunny 70-degree skies.

And now that our 15 minutes of fame are over, we’re back at our desks, getting ready to announce our summer season next week – see you then!